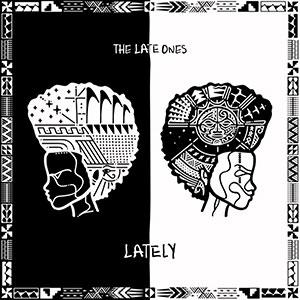 Their debut EP, 2015's 'Revelate', unfortunately never reached us, but thanks to Easy Star Records we can now introduce you to The Late Ones, a trio with mixed Samoan-Afro-American roots, like labelmates New Kingston, consisting of members of the same family (brothers Tui and Tau Avei and their cousin Josh Brunson).

The band was originally formed in Laie, Hawaii, but these days the trio is based in Gardena, California. The Late Ones, a band name referencing their musical and other heroes, ranging from Bob Marley and Tupac Shakur over Jimi Hendrix and John Lennon to Kobe Bryant and Chadwick Boseman, on this 4 track 'Lately' EP seem to have found the perfect balance between hip-hop and reggae.

The EP opens with the excellent 'Babylon Exists', a song accompanied by a music video in which the band members can be seen participating in a Black Lives Matter protest march in Los Angeles held last summer in memory of George Floyd. Tau Avei: "'Babylon Exists' is a straight shot at the evil and brutality that we feel from the government and police. This song is an anthem stating that evil is real, and until we all can unite and figure out how to truly put an end to it, it's gonna live on forever. The past year has been crazy, and the song is so relevant to what's been going on!".

Our personal favorite from the track list, however, is the outstanding 'Brother's Keeper'. Amateurs of hip-hop can indulge in 'Troubled Streets' and the trio concludes with the dubby 'The Noose', a song in which the trio aptly describes what it means to be born black in the United States, with a nice play on words between "noose" and "news":

I was born with a noose round I neck
Still I man trod forward
Amerikkka the free was a lie
Going backwards instead of forward
Dem talk bout views
Well here's the news
Guard your mind
Lucifer on the run!
But the
Noose still tight
And a
Still we fight
With jah blessing we never lose sight!

Standing for something
We not dying for nothing
Keeping my eyes and ears open
I'm focused
Bet you ain't know it
These totem poles got me choking
While Babylon steady joking
They got me runnin' in circles
Got me choking, turning purple
Told myself it's time to get it
No more waiting in line
Zero 7
Diamond in the rough so I gotta shine
Don't be too late to expand your mind
Because time is of the essence
We livin' it ain't no question
Jah is my only protection

In Amerikkka Amerikkka
The oh so great Amerikkka the people they just stare at ya
Don't worry they don't care for ya
You gettin' outta character
Don't lose yo' foundation
Just follow your feet and I promise you levitation
All of the madness, heart on my sleeve fashion
Behind the back passes, all we show is compassion
Don't worry bout the pesos, knowledge is the safe, bro
You have just been served, I'm in the booth with a ladle
Yeah

I was born with a noose round my neck
But today I man still standing strong
In Amerikkka still nobody free
There is evil in abundance
But my faith
They can't take away
If dem try we a eat dem fi lunch
Babylon think dem won di battle
But Satan lockup in the trunk!

A very enjoyable introduction to a band we will certainly keep an eye on!