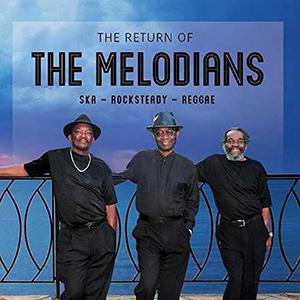 Vocal trio The Melodians, known from rocksteady hits like 'Sweet Sensation', 'Rivers Of Babylon', 'Expo 67' or 'You Don't Need Me', hopefully won't need an introduction? Tony Brevett (brother of the Skatalites' bassist Lloyd Brevett), Brent Dowe and Trevor McNaughton started their musical adventure back in 1963. About a decade later Dowe quit the band, but for 1983's 'Irie Feelings' the trio took to the studio again. After suffering a heart attack, Dowe passed away in 2006, but Brevett and McNaughton continued and in 2013 celebrated the band's 50th anniversary with the release of 'Lyrics To Riddim'. The album would also turn out to be Brevett's last achievement, as later that same year he lost the battle with cancer. Trevor McNaughton decided to soldier on regardless, and flanked by Taurus Alphonso and Winston Dias he now presents 'The Return Of The Melodians'. Stating this album has a high recognizability factor, would be an understatement… 'The Return Of The Melodians' opens with 'I'll Take You Where The Music Playing', originally recorded by American doo-wop, rhythm and blues and soul band The Drifters, and covered by the Melodians a first time in the 1970s, and aforementioned hits like 'Sweet Sensation' and 'You Don't Need Me' were also rerecorded. Winston Dias already scored a modest hit with ska-stomper 'Cerasee Tea' (cerasee, also known as bitter melon, bitter gourd, bitter squash, or balsam-pear, is a fast growing vine of the cucumber family, of which in Jamaica the leaves and stem are often boiled or drawn into a tea and taken for a number of ailments including hypertension, diabetes, parasitic worms, abdominal pains, and purging/detoxing the body and blood) back in the 1960s, and adapts the number here with Trevor McNaughton and Taurus Alphonso. There's even more Melodians classics with 'Little Nut Tree', 'Walking In The Rain' and 'Things You Say You Love', even though the latter was first recorded by  The Jamaicans. Love ballad 'How Am I Supposed To Live Without You', a cover of Michael Bolton's worldwide hit, will probably be for hardcore lovers rock fanatics only. The only new song we discovered in the track list is 'I Wanna Dance With You', an excellent lovers tune. The trio concludes with another version of opener 'I'll Take You Where The Music Playing', for which they invited the otherwise unknown deejay Kulcha Kalley, immediately giving the song a different vibe. Album without too many surprises that none that less manages to convince effortlessly.