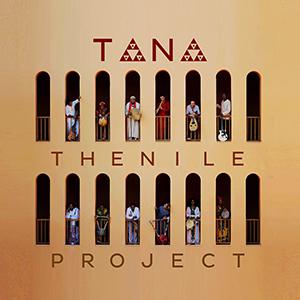 Just like with their previous releases, 'Aswan' (Egypt) and 'Jinja' (Uganda), this new album by international ensemble The Nile Project focuses on an iconic spot along Africa's longest river. This time it's Ethiopia's Lake Tana, the highest lake in Africa and the source of the Blue Nile. Unlike the previous albums, it proved logistically unfeasible to actually record there, so for 'Tana' The Nile Project took to the Manifold Recording Studio in Pittsboro, North Carolina. We may be mistaken, but felt 'Tana' contains more Ethiopian influences than 'Aswan' and 'Jinja' did. Singer Salemnesh Zemene can be heard in no less than four of the ten tracks on 'Tana' and of course the Eritrean influences of krar player and vocalist Ibrahim Fanous are in the same line (opener 'Fulani'). The connecting factor the Nile forms between the different musicians who are part of the project, is also reflected in the lyrics of the songs on the album. Take opener 'Fulani', for example, in which the river is presented as a symbol of love, peace and hope, or 'Ibn Masr' in which Saleeb Fawzy declares that for an Egyptian the Nile is the world, 'Ma Badoor', in which Sudanese Asia Madani rejects the growing tribalism in her country and declares that the Nile is the father of all Sudanese people, and 'Dingy Dingy', in which the band goes even further by stating that there are no differences between Egyptians and Sudanese because both peoples are completely dependent on the Nile. Just like the Nile itself has been a source of fascination for centuries, The Nile Project's albums continue to enchant.