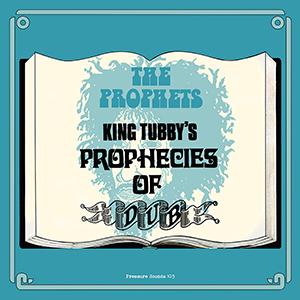 Confusing release, this 'King Tubby's Prophecies Of Dub'… Not only does this album bear almost the same title as earlier release 'King Tubby's Prophecy Of Dub', apart from that King Tubby is clearly mentioned in the title, but the album was actually produced by Pat Kelly and he did not use backing tracks produced by Yabby You, but riddims by Bunny Lee. The track list includes versions of Linval Thompson's 'Long Long Dreadlocks' (opener 'Fair Lady'), a never released dub version of 'Simmer Down' by Johnny Clarke over a revamp of the Move Out Of Babylon riddim, Johnny Clarke's version of Curtis Mayfield's 'Ten To One' ('Babylon Red'), several songs from Delroy Wilson's 'Sings For I' album, and dub versions of Horace Andy's 'Serious Thing' and 'Man To Man'. Then it's back to Johnny Clarke for 'Live Up Jah Man' ('Bad Man Skank') and 'Stop The Tribal War', but the album still concludes with a Yabby You riddim, 'Was Alive', a dub of Dicky Burton's 'God Is Watching You' (different from the version by King Tubby that can be found on the 'Beware Dub' album). Asked about the how and why, Bunny Lee reacted slightly peeved: "Yabby You and Pat Kelly go behind my back and make it up. I never even know about it till years later when Steve Barrow bring it to my attention. But it was my riddims and they used them!", but Pat Kelly, who passed away just last year, put things into perspective: "Most of these tapes were Bunny Lee tapes, and Tubbys get a cut from the song. A lot of people didn't even know that it wasn't Tubbys who went to the studio and do the recording, it was Bunny Lee. Bunny Lee would be with the musicians, and then take the tape to Tubbys, and he say he like that one, or he need a cut from this one.". The fact was that Bunny Lee kept his multitrack tapes in a big closet in the studio so King Tubby could cut dubplates from them to use during his dances. But Pat Kelly clearly saw that differently, as for him that cabinet was nothing more than an archive that was hardly looked after anymore: "That big wardrobe was behind you when you sit at the console, and there was like a wall. I know generally when anything goes in there... it doesn't come out again. Hahaha! Once they go into that place, it's not likely that they coming out!". 'King Tubby's Prophecies Of Dub' was originally released in a very limited edition on the Jamaican Prestige label, supplemented with some even rarer pressings on Yabby's own Prophets label, but thanks to Pressure Sounds, this rock solid, albeit fairly classic dub album now finally gets the attention it deserves.