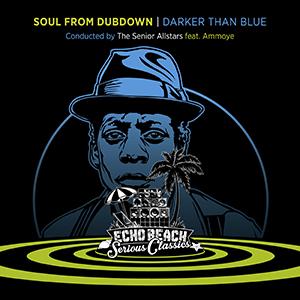 The story behind 'Soul From Dubdown: Darker Than Blue' starts as early as 2001 with 'Darker Than Blue: Soul From Jamdown', a compilation on the now defunct Blood and Fire label that zoomed in on the great influence of American soul in Jamaican music, as proven by songs like Ken Boothe's 'Is It Because I'm Black?', Alton Ellis' 'It's A Shame', Delroy Wilson's 'Get Ready' or 'Baltimore' by The Tamlins, all covers of American soul classics. In 2014 Nicolai Beverungen got the bright idea to record dub-versions of a number of songs from this Blood and Fire compilation. The German top musicians of The Senior Allstars did an excellent job and the result was 'Dub From Jamdown: Darker Than Blue', with 12 great dubs of songs like 'Get Ready' (written by Smokey Robinson, but a big hit for The Temptations), 'Slipping Into Darkness' (by American funk band War), title track 'Darker Than Blue' (originally 'We The People Who Are Darker Than Blue' by Curtis Mayfield) and 'Why Can't We Live Together' (Timmy Thomas). With 'Soul From Dubdown: Darker Than Blue' the album now has a vocal successor for which The Senior Allstars called on the vocal capacities of Canadian-Jamaican singer Ammoye. Enjoy timeless classics like 'Collie Stuff' (originally 'Funky Stuff' by Kool & The Gang), 'Aint No Sunshine' (Bill Withers), 'Baltimore' (Randy Newman) and more!