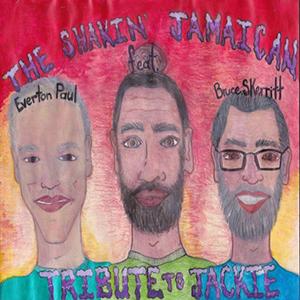 On 'Tribute To Jackie Mittoo', The Shakin' Jamaican, a Canadian trio around Toronto based Jamaican guitarist Shane 'Shaky J' Forrest, does exactly what it says on the tin. Asked about the how and why of this project, Shaky J comments: "For many years, as a guitarist originating from Jamaica, I have always been enamored with the instrumental music of Jackie Mittoo. His work on the organ, tone and technique, helped originate the sound of reggae music we know today, especially that "bubble" feel that gives roots rock reggae a distinct sound. Over the years, I have always incorporated his music as part of my instrumental routine on stage to consistently positive reactions. I felt compelled to record this record as a tribute to Jackie's incredible musicianship.". For the occasion, the guitarist (who also plays bass with Canadian ska-band The Arsenals) was assisted by Everton 'Pablo' Paul on drums and percussion, and Bruce Skerritt on Hammond B3 organ. That being said, in the 9 tracks on this album - Mittoo classics like 'Champion Of The Arena', 'Hot Milk' and of course 'Drum Song' - Forrest's guitar is given a lead role, which at times ('Higher Wire', 'Hot Milk', 'Earthquake') makes 'Tribute To Jackie Mittoo' lean more towards reminds an Ernest Ranglin album rather than sounding like an ode to Jackie Mittoo. Nevertheless, extremely enjoyable relaxing instrumental album.