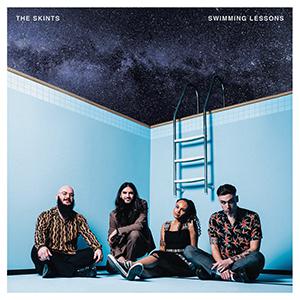 With a wonderfully naive title like 'Swimming Lessons' it might seem as if The Skints wanted to surprise us with a breezy summer album, and the track list certainly leaves room for lighter subjects, but the British band wouldn't be themselves if their songs weren't full of razor-sharp social critique either. Title track 'Swimming Lessons' opens very sweetly with childhood memories of swimming lessons, but then suddenly goes punk as the song is actually about losing one's innocence and the life lessons that irrevocably follow. The first thing we noticed when listening to 'Swimming Lessons' is definitely the return of the punk influences that could already be heard on 'Live, Breathe, Build, Believe', the band's 2009 debut album, here apparent in songs like 'The Island' or 'What Did I Learn Today?'. In sharp contrast are acoustic singer-songwriter ballad 'Donkey Brain', which unwittingly reminded us of the repertoire of Simon & Garfunkel, or closing track 'Stop Looking Back', both with drummer Jamie Kyriakides on vocals. One of the nice things about this English band is that it features four excellent vocalists able to give each song a different vibe and timbre, but this time it doesn't stop there, as for 'Swimming Lessons' The Skints were also joined by Jamaican colleagues like Protoje ('Restless', which also features Marcia, Jamie and Josh, 4 the hard way), Runkus ('Armageddon', an ode to Sister Nancy's 'I Am A Geddion', but at the same time a warning about the times we're living in with Runkus in absolute top form) and Jesse Royal ('Love Is The Devil'). Other recommendations are 'Gets On Top', in which Josh Water Rudge talks about the existential fear getting hold over more and more people because of the never-ending stream of doomsday messages flooding social media day in day out, and 'Oh My Love', classic Skints and a break-up tune with Marcia Richards sounding creepily similar to Hollie Cook! In the light of the recent appointment as Prime Minister of Trump-clone/clown Boris Johnson, we don't want to deny you the lyrics of 'The Island', which read as a cry for help from someone stuck on an island full of madmen:

Dear anyone who hears this
I'm trapped upon the island
The natives have gone wild and
They're making bad decisions
Very bad decisions
It might be what you fed them
It might be what you read them
On the news at 10 cos
They don't play well with others
And can't process different colors
You'd best batten down the hatches
With fry ups and football matches
And imperial restoration
Why are you proud of the nation?
Little England not Great Britain
I am trapped upon the island

And where are our fearless leaders?
They surely won't deceive us
With climate change deniers
And Noah's Ark believers
There's polar bears in Scotland
There's vampires in London
There's dinosaurs across the UK
That I'd hoped had gone extinct

And I can't believe it
Or maybe I can
I never did put it past you
What have you done?
You idiots, what have you gone and done?
I'm trapped upon the island

And I can't believe it
Or maybe I can
I never did put it past you
What have you done?
You idiots, what have you gone and done?
I'm trapped upon the island

I'm trapped upon the island

Another excellent release by this brilliant London foursome!