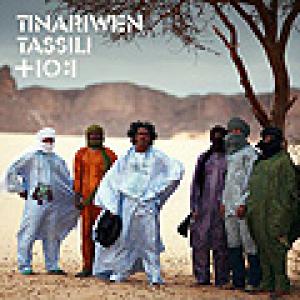 Tinariwen has become the victim of its own success; as one of the few bands in the so-called world music genre this Tuareg band also managed to get the respect of the established pop and rock world, a world in which one day you're still hot, only to be written off the next. Fortunately the members of Tinariwen don't seem to be bothered about all that as for their fifth long player they retreated to the Tassili n'Ajjer plateau in Algeria where they unplugged their electric guitars and recorded a largely acoustic album returning to the original sound of their debut album 'The Radio Tisdas Sessions'. Even retreating to a remote corner did not keep Tinariwen from getting a number of well-known visitors (TV On The Radio's Tunde Adebimpe and Kyp Malone and Wilco guitarist Nel Clyne) offering their collaboration though; the most notable and most successful is the contribution by New Orleanians The Dirty Dozen Brass Band who made 'Ya Messinagh' the most original sounding song on the album. 'Tassili' is not the album for which Tinariwen will be remembered, but the band nevertheless proves lesser albums have no place in the desert.