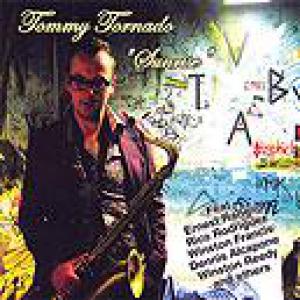 Even though the name Tommy Tornado (born Thomas Streutgers) might not mean much to most reggae lovers yet, some of you might already have seen him at work playing with the fantastic High Notes. For his debut album Tommy opted for a mix of original compositions and classics. For the vocal side of 'Sunrise' he got the support of just about all of the artists who over the past few years went on tour with the High Notes (Winston Francis, Dennis Alcapone, Rico Rodriguez, Ernest Ranglin, Winston Reedy...) and it's also his High Notes band mates who provide the musical backing on this album. All this makes for a gem of an album sounding like a classic piece of Jamaican vinyl. We'd encourage Tommy to spend a little more time on the sleeve design of his next album though as appearances do matter!