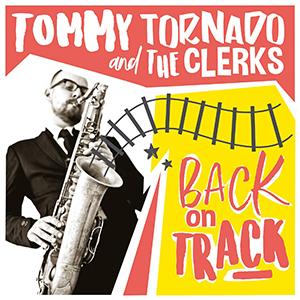 Dutch Saxophonist Thomas Streutgers came pretty close to giving up on his alter ego Tommy Tornado. Rude Rich & The High Notes, the band that had backed him on his first two albums, had disbanded and Thomas had his hands full with The Busquitos, the jazz-comedy act playing up to 120 shows a year. Fortunately, some persistent fans kept pushing and in 2014 Thomas found a new backing band in The Clerks, a seven-piece crew from Cologne. The immediate chemistry reignited the musical spark in Thomas, and now there's this aptly titled 'Back on Track'. The track list contains 8 new instrumentals, mainly with Tommy's saxophone in the lead role (swapping it for the flute in 'The Flame' and also playing melodica and Fender Rhodes piano elsewhere) and 'Lively Stroll', the only vocal cut in the track list, for which Thomas called on King Django, front man of New York based ska formation Stubborn All-Stars (a song with which Thomas said he wanted to put down a Judge Dread-like vibe) as the odd one out. The whole project, merging reggae, ska and jazz, was mixed and mastered by Dutch producer Arno Goldstein, better known as Dubcreator, who also created three final dubs as the icing on the cake. Our personal favorites: the western-themed 'Silver Dollar' including pistol shots and horse neighing, and jazzy closing track 'Dearest', which for one reason or another reminded us of the theme music of the classic television series 'Agatha Christie's Poirot'.