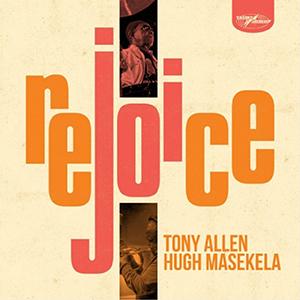 What was originally intended to be the first collaborative project of two music legends and musical besties, eventually turned into a posthumous tribute to South African jazz trumpeter Hugh Masekela, who passed away in 2018, and now, due to the sudden demise of afrobeat pioneer and master drummer Tony Allen, unfortunately ends up a double farewell.

However, as we've grown accustomed from these gentlemen, this is a departure in style with an album title already bringing some consolation: 'Rejoice', we'll always have their music!

The foundations for this album were already laid at the Livingston Studios in London (where Nick Gold previously recorded gems like Ali Farka Toure & Toumani Diabate's 'Ali & Toumani' and Orchestra Baobab's 'Specialist In All Styles') back in 2010, but the actual idea already popped up in Tony's head as far back as 1984: "I first proposed the idea of working with Hugh in London in 1984, just before I moved to France. Eventually we were in the same place at the same time, it just happened to be over a couple of decades later!".

Even though their paths had crossed before, Allen and Masekela sealed their friendship after they both took part in FESTAC 77 or Festival des Arts et de la Culture négro-africain in 1977, which was held in Lagos, Nigeria, and played an important role in the popularization of Pan-Africanist thinking. Since then, Masekela has always been fascinated by afro beat rhythms and Allen developed a passion for African groove and Afro-jazz; a combination that resulted in numerous lively conversations between the twosome.

The fact it ultimately took until 2019 to complete this project was mainly due to the hectic and often incompatible tour schedule of both gentlemen, as Tony himself admitted: "I would meet Hugh when we played together in places like Helsinki and Copenhagen. Every time we met, he would ask me: "What's happening with this project?", and I had to say: "I don't know!". Eventually I asked Nick if I could hear the tapes, and that started the project back up again. Unfortunately, Hugh passed away soon after." World Circuit poetically describes 'Rejoice' as: "...the long overdue confluence of two mighty African musical rivers...", with the mix of Allen's lively drum rhythms and Masekela's melancholic, warm horn arrangements resulting in a cross between afrobeat and township jazz, but which Allen preferred to describe as: "...a kind of South African-Nigerian swing-jazz stew...".

Even though Masekela was of course mainly known as a flugelhorn player, he insisted on making a vocal contribution as well, the one time in Zulu, like in jazzy opener 'Robbers, Thugs And Muggers (O'galajani)' or title track 'Jabulani (Rejoice, Here Comes Tony)', in which Hugh sings: "Jabulani Nang'u Tony/E'Shay Izighubhu/U Ya Zi Dhabula! ("Be happy, here is Tony/Playing The Drums/He Is Hitting Them Hard/He Is Blasting Them!"), and elsewhere in plain English ('Never (Lagos Never Gonna Be The Same)'), an ode to Fela Kuti and our personal favorite from the short, eight song track list).

It could hardly be more symbolic, but the album actually ends with a track called 'We've Landed'.

Worthy testament of two musical masters we're definitely going to miss, even though that jam session up there in the skies is undoubtedly already in full swing!