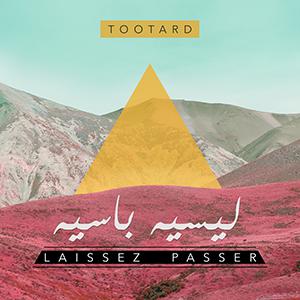 TootArd, a group of young musicians from Majdal Shams in the Israel occupied Golan Heights (a plateau on the border between Israel, Lebanon, Syria and Jordan), started out playing reggae covers back in 2010. Add some influences from Tuareg music to the mix (not accidentally also a stateless people) and the fact all members of the five-man band grew up with classical Arabic music, and you get the sound of TootArd. 'Laissez Passer', the title of this new album, refers to the political status of the band members as so-called "stateless citizens". Since 1967 the residents of the Golan Heights (mainly of Druze descent) are considered Israeli residents, but they don't have the Israeli nationality and, instead of a regular passport, have to use a so-called "laissez-passer" whenever they want to travel. None the less, it was also that status as stateless citizens which made them understand music is something that transcends borders and in which you can go wherever you let your imagination carry you. Their own situation may be far from ideal, but that doesn't mean the members of TootArd don't realize there are people out there who have it worse... Gazing down from the Golan Heights you can see Syria stretched out in the distance, and intimate closing track 'Syrian Blues' is a tribute to the civil war-ridden country. Optimistic sounds from one of the geopolitically most complex areas in the world!