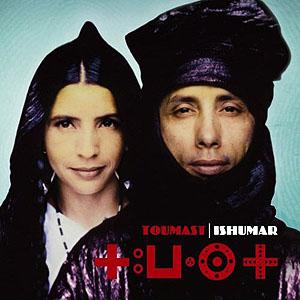 Toumast arose from the collaboration of Tuareg musician Moussa Ag Keyna, singer Aminatou Goumar and French producer Dan Levy. Like the members of Tinariwen, Moussa also fought for the Tuareg Liberation Front, but when he got seriously injured in an attack in 1994, he was evacuated to France. It was there that he got involved with music; no longer the Kalashnikov, but his lyrics and music would now be his weapon. 'Ishumar' - the word is a corruption of the French "chômeur" or "unemployed person", a nickname the Tuareg got when, during a period of great drought in the 1970s and 1980s, they migrated to Algeria and Libya in search of work - breathes the atmosphere of the desert, but mixes that with a psychedelic trance sound that at times is reminiscent of the music of The Doors. The songs on 'Ishumar' tell the story of the Tuareg rebels ('Ikalane Walegh', 'Ammilana', 'Kik Ayitma') or the beauty of the Sahara ('Innulamane', 'Ezeref'). Absolute must have!