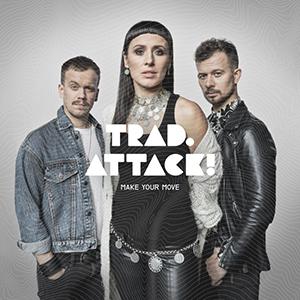 'Make Your Move' is the third long-player by Latvian trio Sandra Vabarna, Jalmar Vabarna and Tŏnu Tubli, who as Trad.Attack! have been mixing Latvian folk with influences from rock, metal and EDM since 2013; a sound that occasionally reminded yours truly of Finnish band Värttinä. We certainly don't want to withhold the content of introduction in the liner notes of this album, as, even though the band members undoubtedly meant it differently, these lines read as a warning against the current global COVID-19 PANdemIC: "Everything that stops dies... Hearts, thoughts, traditions... We know that people tend to repeat the same patterns, just because someone told them that this is "the right way", because someone gave them the evil-eye when they wanted to do something in their own unique way...". In the songs on 'Make Your Move', the trio alternates between self-penned lyrics (opener 'Rikas Sittus', an indictment of the 1% super-rich, 'Saada Vidma', a supplication for rain, unfortunately yet another burning issue), old folk traditions from all over Latvia and even archive recordings from the Estonian Folk Archive at the Estonian Museum of Literature ('Tekhe Ruumi!', originally recorded by Maria Koert from Mustjala in 1961, and 'Siberi Unelaul', a Siberian lullaby sung by Olga Matvejeva from Haidak in Siberia). Latvian folk 2.0!