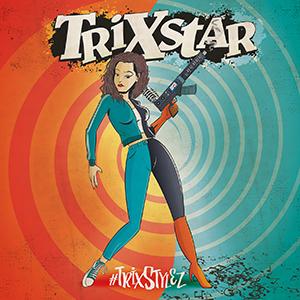 German-Iranian Ima Ghafouri aka TriXstar may have been in the music business for over a decade now, but apart from the 2013 5-track 'New Era' EP, thus far only a handful of singles were released. Most of those singles and the songs from the EP (sometimes in an alternate version) were finally bundled for debut album '#TrixStylez'. TriXstar clearly likes some eclecticism, as the track list of '#TrixStylez' features anything from ska and rocksteady ('Stand Up', a 2015 combination with Getaway Crew, 2016s 'Love Nuh Easy', one of two duets with Skarra Mucci) over new roots ('Believe' and 'Don't Worry', both from 2015), lovers rock (last year's 'Old Fashion Love' and 'When Lovin Take A Place' over The Heptones' classic Party Time riddim) and dancehall ('Blazin Fire', 'Firm Stand' and 'New Era', title track of TriXstar's eponymous debut EP) to even some moombahton ('Good Over Evil', a duet with Perfect Giddimani, again from 2015), a hint of hip-hop ('Fly Skit', and in 'Believe', fans of the genre will undoubtedly recognize the influence of Nas' 'I Can'), dubstep (Selec's Loaded Dice remix of opener 'Beautiful Day', the original version featured in the track list of the 'New Era' EP) or even some EDM in the Selec remix of 'My Time To Shine'. Conclusion: the track list of '#TrixStylez' certainly counts more than enough enjoyable songs to convince, but stylistically it was just a bit too divergent to captivate until the end, and we could have done without those four remixes by Selec and Majkizioom as well. However, as proof of TriXstar's musical versatility, this long-player debut can definitely count!