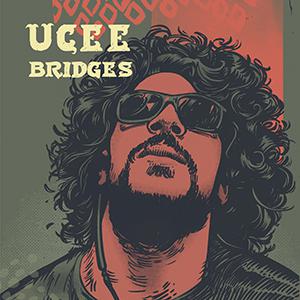 Nice discovery this 'Bridges', the second album by UCee, born Ussama Soleman in the German town of Regensburg in Bavaria, but of Tunisian-Egyptian descent. UCee's musical career started in 2004 as lead vocalist of the German band King Banana, later renamed UCee & The Royal Family. However, after moving to Prague, UCee was forced to continue as a solo artist, a double decision that clearly did the singer no harm. On 'Bridges' UCee proves himself to be a bit of a jack of all trades, as he's not afraid to tackle dance hall songs ('Mrs. Clean', 'All Night'), as well as conscious tracks (opener 'Send A Prayer', title track 'Bridges' or the excellent 'Change Will Come') and ganja tunes. That being said, on 'Bridges' UCee seems especially gifted in lovers and break-up tunes, of which no less than 5 examples can be found in the track list. We especially remember 'My World Is Empty', a nod to the soul classic of the same name by Diana Ross & The Supremes, and 'She Lies', for which UCee revisited the Real Rock riddim. The drum patterns for the majority of the songs on 'Bridges' were played by Sam Gilly of Austrian House of Riddim, UCee also collaborated with his good buddy Djei Gogo of Flavor Production, and Rootz Radicals produced the Candy Kush riddim for the catchy ganja tune 'I Don't Care'. With The Gideon (born Aijah Nunes, and part of the Jamaican Jah Ova Evil collective), a good friend of UCee, 'Bridges' also features one vocal guest, to be heard in the hip-hop flavored 'The Bomb', a tribute to a number of Jamaican founders of the reggae genre. Versatile artist to keep an eye on!