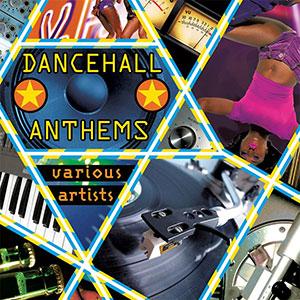 From 1999 to 2011 'The Biggest Ragga Dancehall Anthems' compilation was a popular annual fixture on the Greensleeves label's roster. With the popularity of the genre dwindling, the series died a silent death, but VP Records now came up with a nice spin on the original in the form of 'Dancehall Anthems'.

For this compilation, producer Jeremy Harding asked a varied number of Jamaican artists to revisit a series of timeless "dancehall" classics. The result is as refreshing as it is catchy.

Jeremy Harding: "Originally, this was going to be a VP Records 40th anniversary project, but it expanded, as I wanted to pay tribute to the history of dancehall in the broadest sense, reconsidering iconic songs and particularly the roots of the genre, including what played heavily on sound systems when I was growin up. I wanted to give the artists, new and veterans, the chance to put their spin on these classics.".

Some versions on the album are just covers, but other artists let their creativity run wild and came up with a set of entirely new lyrics. The best example from the latter category is probably Sean Paul's 'Marijuana Mi Love', for this ganja tune drawing inspiration from Tiger's 'No Puppy Love'.

Finally, we'd like to salute Ikaya and Naomi Cowan, the only two female artists in the track list. with 'Sorry', Ikaya brings a rock-solid cover of Tracy Chapman's 'Sorry (Baby Can I Hold You)' (already immortalized in reggae by, among others, Sanchez and Foxy Brown), remaining quite faithful to the original, but Naomi Cowan bests her "rival" with a very personalized rendition of Garnet Silk's 'Splashing Dashing'.

Of course, this is not essential listening, but with 'Dancehall Anthems', Jeremy Harding did deliver an almost perfect stylistic exercise and we guarantee that you'll enjoy every track to the fullest.