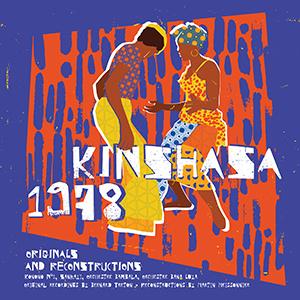 Things around Crammed Discs' Congolese releases had quieted down so much we were convinced the label that put the term "congotronics" on the map had pulled the plug on the project. The release of this double 'Kinshasa 1978: Originals & Reconstructions' compilation proved otherwise.

As the title suggests, the story behind this release begins in 1978, when Bernard Treton, a producer and technician for Radio France, spent some time in Kinshasa to train a number of young sound engineers for what was then radio station La Voix du Zaire (later La Voix du Peuple, these days Radio-Télévision Nationale du Congo). Treton thought it was a good idea to teach his pupils how to record a live band and asked percussion master Maître Nono to introduce him to some local musicians. At a wedding party, Bernard got to know Mbuyamba Nyuni, front man with Sankayi (and later one of the founding members of Kasai Allstars), a meeting that turned out to be the opening he was looking for and would lead to recordings with Sankayi, Konono N°1, a band that needs no further introduction, Orchestre Bambala (as the name already indicates, mainly made up of members of the Mbala people from the former province of Bandundu in the west of Congo producing an accordion driven sound you'd rather expect in Madagascar or Brazil) and Orchestre Bana Luya (made up mainly from members of the Luba people in Mbuji Mai in the eastern Kasai region of Congo, producing a sound of amplified likembes reminiscent of that of Konono N°1), the four bands that can also be heard on this compilation.

From these original recordings a first album entitled 'Zaïre: Musiques Urbaines à Kinshasa', published by the French Ocora label, was released in 1989. However, at that time, the European public was far from ready for the raw, strange music full of amplified likembes, but one Belgian, Vincent Kenis, was mesmerized by what he heard and, after years of fruitless searching, would breathe new life into the sound with releases by, among others, Konono N°1 and Kasai Allstars, on the Crammed Discs label under the name "congotronics".

For the LP 'Kinshasa 1978', 80 minutes of previously unreleased material from those original recording sessions was used - divided over four compositions/improvisations, the longest of which, lasting just under thirty (!) minutes - and then French producer and DJ Martin Meissonnier (Tony Allen, Manu Dibango, Fela Kuti, King Sunny Adé, Khaled...) was offered the chance to remix those same tracks for an added bonus-CD: "When he offered me (the chance) to create remixes from the original stereo tapes, I didn't hesitate! I aimed at staying as close as possible to the rhythms and the spirit of their trance-inducing music, while giving it a fatter sound, for use in my DJ-sets. It turns out that it does work, and young audience members often come and ask me about the identity of these strange tracks that they can't find with Shazam...".

Interesting release for those who want to get to know the roots of the current congotronics movement (and if still in doubt: all royalties earned with this double album go to Doctors Without Borders)!