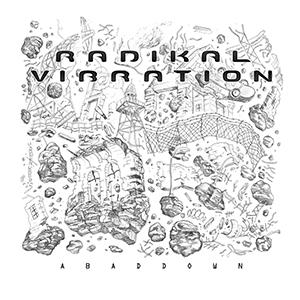 Last year Radikal Vibration, a collective of four beat makers from Geneva, was already responsible for the music of Brother Culture's 'Jump Pon It' from his successful 'Code Name' album released on Evidence Music. The unmistakable chemistry between Radikal Vibration and Brother Culture was reason enough for the Swiss label to give the green light for an album produced entirely by Radikal Vibration and the result is 'Abaddown'. The title of the album is a term from Hebrew that translates as "destruction", as reflected in the cover image, a work by Jonas Tirabosco aka Robert Safety, one of the four members of Radikal Vibration. In the track list 11 solid tracks (completed with 4 dub versions) tailored to the sound system scene for which Radikal Vibration each time collaborated with a guest vocalist; a guest list that of course had to include Brother Culture, but also featuring a lot of other veterans like King Kong (the excellent 'The Earth'), Teacha Dee and Denham Smith longside young talent like Exile Di Brave (the more than aptly titled 'Blaze'), Micah Shemaiah ('Deal With It So' over a revamp of Mikey Dread's Roots And Culture riddim and immediately our favorite song from the track list) or Italian singer VirtuS ('Freedom'). A special mention goes for 'The Sound', in which the voice of the lamented Wayne Smith can be heard once more (even though this is in fact a remix of a song that was already released back in 2015 on Evidence Music's the 'Dancing Machine Riddim' compilation).