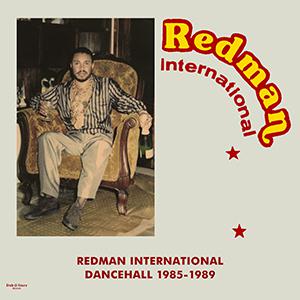 With 'Redman International Dancehall 1985-1989', Dub Store Records presents an excellent compilation of digital hits from the catalogue of producer Hugh 'Redman' James. Hugh, son of Miss Vera aka Miss Jay, selector of her own Esquire Soundsystem and probably the first female selector in Jamaican music history, developed a fascination for sounds like Sir George the Atomic, Sir Daley's and King Tubby's Hometown Hi-Fi from an early age. It was King Tubby especially who soon became Hugh's great idol, and from 1976 onwards, Redman (a nickname he earned because of his light skin tone) became a regular hang around at Tubby's studio. Love for music is one thing, but of course he also had to bring home the bacon, and in 1978 Hugh leaves Jamaica to try his luck as a spray painter in Hartford, Connecticut. In the following years, Redman continues to travel back and forth between Jamaica and the US, each time returning home with some materials that would eventually allow him to build his own Redman sound system. It still took until 1985 for Redman to take his first steps as a producer, when in King Tubby's Studio he recorded Puddy Roots' 'When I Release': "I wanted to follow in his footsteps, but Tubby said: "Never be a follower, be a leader. When you lead, people follow you."." After the landslide the Lloyd 'King Jammy' James produced 'Under Me Sleng Teng' caused, Redman also goes digital. The tune for which the producer undoubtedly will eternally be remembered is Conroy Smith's 1989 smash 'Dangerous', but in addition, Redman was also responsible for a whole bunch of other eighties hits like opener 'Old Chain' (by a certain Da Da Waps), Dave Bailey's 'Runnings', Admiral Tibet's 'New Tactics', or even 'Without Your Love', a version by Carl Meeeks, one of Redman's early discoveries, over the well-known Youthman riddim . Unable to keep up with the rapid changes in the Jamaican music landscape of the early nineteen nineties, Redman slowly disappeared from attention, something he always remained philosophical about: "No man don't rule forever, you know? Ervery man have a time slot, so you play your part and move on. They say champion comes and champion goes. You don't come to stay forever!". 'Redman International Dancehall 1985-1989' now brings together Redman's best work on one disc (or two LP's), in addition to 13 vocal cuts also featuring 5 dub versions. Digital niceness galore!