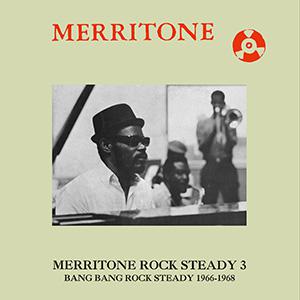 Following 'Merritone Rock Steady 1 & 2', Dub Store Records now presents this third part in the series (and a fourth album has also already scheduled). From 1966 onwards, Trinidadian guitarist Nerly 'Lynn' Taitt (brought to Jamaica by Byron Lee) and The Jets (Paul Douglas - drums, Val Douglas - bass, Willie Lindo - guitar, Ernest Ranglin - guitar, Monty Alexander - piano, Gladstone 'Gladdy' Anderson - piano) became the regular studio band at Federal Records. Legend wants it was Jets pianist Gladstone 'Gladdy' Anderson who, during the recording of Hopeton Lewis' 'Take It Easy' (generally considered to be the first rocksteady song ever recorded) pointed out the "rock steady" vibe of the song. Where the Merritone label was concerned, Winston 'Merritone' Blake, owner of the eponymous sound system (or discotheque, as it was then still called), which was mostly popular with the Jamaican middle and upper class, was paid off by the Khouri family, owners of Federal, who wanted to use the popular name to be able to sell their productions more easily. This third volume opens with the infectious 'Bang Bang Rock Steady', a song by Tomorrow's Children, a band that included Pluto Shervington and Ken Lazarus, and is in fact a cover of Cher's 'Bang Bang (My Baby Shot Me Down)' (also known in the version by Nancy Sinatra). But the most notable name is that of Henry Buckley, of whom no less than five songs can be found in the track list. Now largely forgotten, at the time Buckley was put forward by Federal as one of their big stars. Most recognizable is 'With A Girl Like You', Buckley's rocksteady version of the eponymous hit song by The Troggs. Another 22 gems from Merritone's rocksteady catalog!