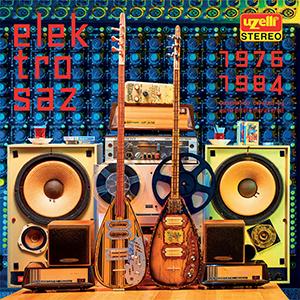 Fans of BaBa ZuLa curious to find out where this Turkish draws their inspiration from, we can certainly recommend 'Uzelli Elektro Saz: 1976-1984'. The compilation was edited by BaBa ZuLa front man Murat Ertel and his wife Esma, and focuses both on the revolution the traditional saz or bağlama went through when the instrument was electronically amplified from the 1970s onwards, and the glory years of the Uzelli Kaset label founded in 1971 by Muammar and Yavuz Uzelli, two Turkish brothers who moved to Frankfurt and with their cassettes soon provided the soundtrack for the many Turkish guest workers all over Europe. Due to the increasing popularity of the label (also within Turkey) the brothers moved back to Istanbul in 1977. Over the years the Uzelli label has released some of the most important releases from Turkish pop, folk, psychedelia and jazz, from the likes of İbrahim Tatlıses, Grup Turbo and Kibariye. When in the 1990s, the music industry switched to the CD format, the Uzelli brothers stubborn heartedly continued to focus on their cassette releases. Only recently, the entire back catalogue of the label was digitized and some vinyl releases like this 'Uzelli Elektro Saz' have already been released. The compilation opens with Akbaba Ikilisi's 'Darildim Darildim', the tale of a man lamenting his fate in solitary confinement, a song that might just as well have come from the soundtrack of the film classic 'Midnight Express'. Other recommendations from the track list are 'Misket' (featured in two different versions) and 'Topal', both instrumentals by Kina Gecesi Ensemble and Sari Zeki respectively. Fascinating piece of Turkish music history!