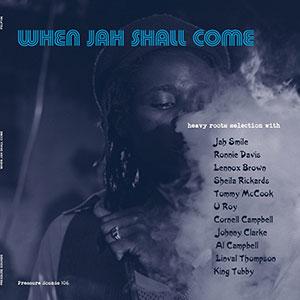 The Pressure Sounds label ends this year of despair with a tribute to Bunny 'Striker' Lee, who passed away in October, and does so in style with a collection of rare and unreleased tracks perfectly capturing the vibe in a Jamaican studio, including false starts and background chatter.

The track list includes two unreleased songs by Jamaican veteran Linval Thompson ('Look How Long Nyabinghi Calling You' and 'Go Jah Jah Pickney'), who can also be heard in the intro of 'Tommy's Vibration', a little-known instrumental version of Linval's 'Jah Jah A The Conqueror'.

Also quite unique is 'Ethiopian Rock', a deejay-track by a certain Jah Smile, none other than Barry Brown's alter ego, before he decided, at Bunny's advice, to quit deejaying, to start focusing on a career as a singer.

Speaking of curiosities, no one, including Bunny Lee, could remember who was responsible for the vocals on 'Life Of My Own', and in order not to have to put down John Doe, the pseudonym The Raver was chosen.

'War Zone' and 'Keep On Running' are both dub mixes by King Tubby, but with additional effects added afterwards, something foreign record labels and sound systems often did to create their own unique versions.

Finally, the track list also contains two dubplates sung by Cornel Campbell. The first, 'King Tubby's vs. Arrows Dubplate', an ode to King Tubby's in which Arrows Sound System is advised to pack up and go, and 'Bunny Lee & King Tubby's Dubplate Special', also dedicated to King Tubby's and the man to whom we owe this compilation: Bunny 'Striker' Lee.

That being said, our favorite from the track list is 'Jamaican Fruit Of African Roots', in which Alpha Old Boy Lennox Brown cuts loose on his sax, accompanied by the vocals of an unleashed Sheila Rickards with lyrics that keep the song current in the light of the Black Lives Matter demonstrations.