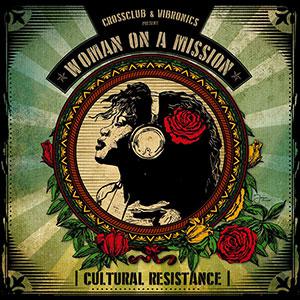 Especially for International Women's Day, British producer Steve Vibronics presents 'Woman On A Mission', a compilation for which he exclusively invited female vocalists. It resulted in 8 tracks, mostly in Vibronics' typical UK stepper style. Singers like London based Trilla Jenna, who, with the solid 'Ghetto Yout Nah Give Up', proves she's still got what it takes, Boney L (for many years a regular vocalist for Vibronics, but with 'Rise Up' returning to the studio for the first time in over a decade), and Cape Verdean-Dutch singer Nish Wadada (the dubby 'Each One Teach One' being one of the highlights from the track list), hopefully don't need an introduction, but names like Nia Songbird, Vanya O or Sis I-Leen, may be less known. Nia Songbird is a young singer from Leicester who had already collaborated with Vibronics on previous occasions and here signs for the aptly titled opener 'All Sisters Unite'. Vanya O, who hails from Zagreb, began her career as a member of Radikal Dub Kolektiv and is now one half of Croatian dub duo Dubble. In 'One Dub Nation' shows the Croatian singer both shows her vocal and melodica skills. For Sis I-Leen (real name Aline Zuber), we have to head to the Swiss city of Geneva, where she's made a name for herself thanks to collaborations with OBF Sound System. For 'Woman On A Mission' she recorded the heavy UK stepper 'Peaceful Warriors'. Then there's Saraléne, a Berlin vocalist who also already collaborated with Vibronics on at least one previous occasion, but with 'More Love' does not provide the most memorable song from the track list. Finally we end up with London based Portuguese vocalist Nanci Correia, part of the crew around Congo Natty, and also one half of jungle/dubstep/reggae/hip hop/jazz/soul/blues duo Nanci & Phoebe. With the excellent closing track 'Woman Is Power', the Portuguese singer still adds a final highlight to this compilation full of woman power. Still not convinced, then we would like to add that 10% of the proceeds from this album will go to Womankind Worldwide, an organization supporting women's organizations all over the world. With 'Woman On a Mission' Steve Vibronics has already provided you with the ideal soundtrack, so the only thing remaining is to wish all you beautiful ladies out there a great International Women's Day!