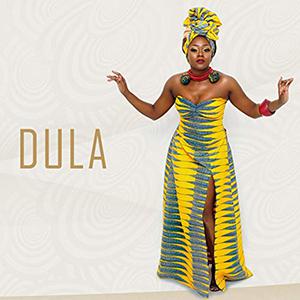 Houston, Texas based Vivalda Dula is hailed as the new diva of Angolan world music and with 'Dula' she's now presenting her second album. Even though at first it seemed Vivalda was heading for a career in football, fortunately she was passed one the necessary creative genes by her grandfather António Domingos, a storyteller, and great-grandfather Dia Lobilo, a master of the madimba (Central African xylophone) and kisanji (thumb piano). On 'Dula' the singer and percussionist alternates between Kimbundu, Portuguese and Spanish. The more pop-flavored tracks on this album (the funky 'Mora Em Nos', a song about the importance of self-worth, and 'Kibamba', the English rock-flavored 'Butterfly Soldier') were less to our taste, but when the singer really delves into her Angolan roots, like in opener 'Monandengue', in which she speaks out on the fate of children who become victims of human trafficking and forced labor, the melancholic 'Lamento', 'Guerreira', a mix of classical strings and fierce Angolan percussion (and a song about the seventeenth-century Angolan queen Njinga Mbande, but actually an ode to Dula's mother, who just like Mbande was born in the province of Malanje and passed away during the recording process of this album), and finally the infectious 'Karolina', our absolute favorite from the track list and a duet with Angolan-Portuguese singer Angelo Boss, she's more than able to charm us. Angolan tradition with a modern twist.