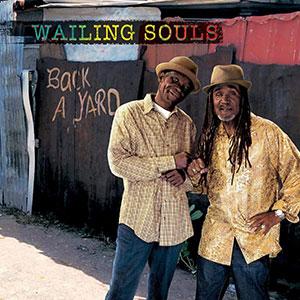 With 'Back A Yard', Alborosie does the same for Wailing Souls as he did for The Tamlins in with 2010's 'Re-Birth': breathing new life into the career of a "forgotten glory" from Jamaican music history.

And just as he and the trio reworked the great Tamlins hit 'Baltimore' for that last album, for 'Back A Yard' he revamped 'Shark Attack', the biggest hit from the Wailing Souls' 'All Over The World' album (which earned them a Grammy nomination at the time).

Albo is a big fan of the band, these days reduced to duo Winston 'Pipe' Matthews and Lloyd 'Bread' McDonald: "It's no secret that Wailing Souls helped shape the sound of reggae from day one. I First got hooked on 'Firehouse Rock'. With the album 'Back A Yard', it was my pleasure to bring back a vibe that they controlled in the late nineteen eighties and early nineties and to remake 'Shark Attack', one of my favorite songs, which deals with issues we still face today in Jamaica and worldwide!".

The sound on 'Back A Yard' harks back to the band's output from the 1980s, when they recorded for labels like Greensleeves and Live & Learn Records, with as highlights, in addition to the aforementioned 'Shark Attack', opener 'Down In Trench Town', in which the duo pays tribute to the neighborhood where it all began, 'In The House Of Jah', which will undoubtedly become a sing-along at concerts, and 'Stay Calm', classic Wailing Souls just the way we like them.

Wailing Souls and Alborosie don't quite reach the level of Willi Williams and Roberto Sanchez (we could have done without the closing piano ballad 'Look What's Happening'), but this is still a great comeback album! Wailing Souls are 'Back A Yard' once again, and that should be a joy to all!