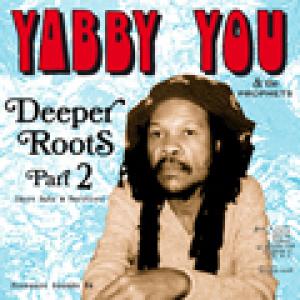 For the track list of the sequel to their 2012 compilation 'Deeper Roots: Dub Plates And Rareties 1976-1978', Pressure Sounds seems to have opted for some of the better instrumentals and dub versions from Yabby You's catalog. Many of the tracks on 'Deeper Roots Part 2' you'll recognize from other Yabby You compilations, but the versions used here are all slightly different ('Walls Of Jerusalem', 'Thirty Pieces Of Silver', 'Man Of The Living', 'Chant Down Babylon'...). A fun and interesting exception in the track list is 'Sipping I & I Chalice' (featured here together with its dub version 'I & I Chalice Version'), which appears on CD for the very first time as it was formerly only ever available as a rare vinyl single. 'I Can't Hide', here in a version with Tony Tuff on vocals, is a reworking of the classic by rocksteady crooner Ken Parker and, because of the cheerfulness of the song, is a bit of an odd one out in the track list of this compilation. The liner notes accompanying this second part are also noteworthy, because instead of the usual list of musicians, studios and producers, presents us with the story of the first encounter between Pressure Sounds founder Pete Holdsworth and Yabby You, a man who Pete describes Pete as: "... hard to get to know and near impossible to forget!" (quote from singer-songwriter Smog aka Bill Callahan's 'A River Ain't Too Much To Love') and: "In a country that is full of character, Yabby You had a big character!". Fans of Yabby's music probably won't disagree with Holdsworth and 'Deeper Roots Part 2' once again offers them the chance to add some of the Jesus Dread's unforgettable gems to their collection.