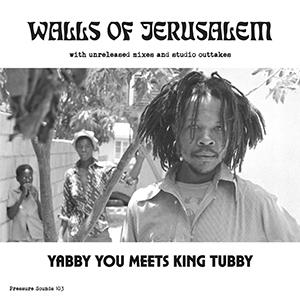 With 'Walls Of Jerusalem', the Pressure Sounds label revives one of the classics from the catalogue of Vivian Jackson aka Yabby You. Although in this case, revives is probably an understatement, as this album has a long history. 'Walls Of Jerusalem' was first released in a very limited edition unprinted white cover not mentioning any performing artist. In the United Kingdom the album was released on the Nationwide label in 1977 under the title 'Chant Down Babylon Kingdom', with Yabby's name misspelled as Yabba Youth. Since the album was a unique collaboration between Yabby You and King Tubby, when he re-released 'Walls Of Jerusalem' on his own Prophet Record label, Yabby decided to rename it 'King Tubby meet Vivian Jackson (Yabby You)'. True Yabby You fans may recognize tracks like title track 'Walls Of Jerusalem', 'Chant Down Babylon' or 'Jah Vengeance' from 'Jesus Dread 1972-1977', the excellent 1997 double compilation album on the Blood and Fire label, but with this edition of 'Walls Of Jerusalem', Pressure Sounds is rereleasing the complete album counting six vocal cuts and as many dubs. As the icing on the cake, Pressure Sounds also added a number of recently rediscovered studio outtakes to the track list. They shed a revealing light on Yabby and Tubby's way of working, and, as a listener, place you next to the musicians in the studio, as it were, where, in addition to the chatter of the studio musicians, you hear Yabby (in the singing booth) communicating with Tubby (over his "talkback microphone") while they shape the finished tracks. We conclude with two quotes, one by King Tubby about Yabby and then Yabby's vision on dub-guru King Tubby. King Tubby: "Me like Yabby You because of how him think: as a man you check him music, and see what him a gwaan wid. Him easy fi get on with. His intelligence makes his music appreciative by Jamaicans and foreigners alike, even though he is a dread. Not a Selassie dread, he is a Jesus Christ dread. A Leo, a man of unique thought, take for example all the cuts on this present LP. Dem original. A So him res.". Yabby You: "Well when I man in a Tubby's presence him mek I feel like him bredda, and from ever since I a youth a grow, I man write the song them, I man would a carry it to him and him would mek me sing it to him, and say whether it sound good or not. From I man know him, we never have a rash word, we always cool. Well I feel say Tubby is a true Aquarian man, him na cheat no one, for him and I know is a duty we have fi do, so we just do it.". A collaboration that was almost literally written in the stars and resulted in indestructible reggae and dub classics each and every one of them!