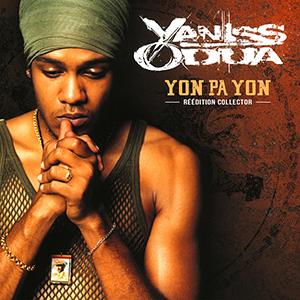 These days Yaniss Odua may be a sounding name in the French reggae scene, but in the early 2000s the man was still an unknown migrant from Martinique who was trying to gain a foothold in Europe. In anticipation of a new album, scheduled for spring 2020, Odua is already serving us this "réédition collector" reissue of 'Yon Pa Yon' (Creole for "one for one" or "step by step"), the iconic 2002 album which catapulted him on the French reggae map. For the occasion, two new songs were added to the original track list, 'J'ai La Rage' and 'Sa Mwin Ni Pou Bay', but after all these years scorchers like 'Mal Au Coeur', 'Prends Garde A Toi' and of course the cast-iron anthem 'La Caraibe', remain the real strong makers of this album. About twenty years later, the catchy mix of new roots, French ragga, dancehall and hip-hop in combination with Yaniss' flow remains a perfect formula for success. French reggae/ragga classic!