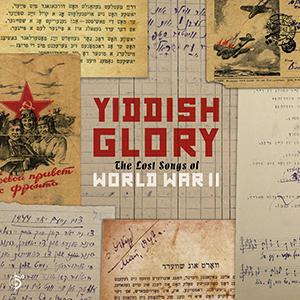 If you're looking for a solid piece of unique music history, check out 'The Lost Songs Of World War II'. This is a collection of Yiddish songs from the Russia of the Second World War, collected at the time by ethnomusicologists Moisei Beregovsky and Ruvim Lerner, connected to the Kiev Institute for Jewish Proletarian Culture. Sadly, the project was never completed, as in 1950 Beregovsky was arrested during one of the post-war anti-Semitic purges in Stalinist Russia. The boxes of archival material were sealed and would remain hidden away for decades.

A bit of historical perspective might be appropriate here... After the foundation of Israel in May 1948, and its alignment with the USA in the Cold War, the 2 million Soviet Jews, who had always remained loyal to the Soviet system, were portrayed by the Stalinist regime as a potential fifth column. Despite his personal dislike of Jews, Stalin had been an early supporter of a Jewish state in Palestine, which he had hoped to turn into a Soviet satellite in the Middle East. But as the leadership of the emerging state proved hostile to approaches from the Soviet Union, Stalin became increasingly afraid of pro-Israeli feeling among Soviet Jews. His fears intensified as a result of Golda Meir's arrival in Moscow in the autumn of 1948 as the first Israeli ambassador to the USSR. On her visit to a Moscow synagogue on Yom Kippur (13 October), thousands of people lined the streets, many of them shouting Am Yisroel chai ('The people of Israel live!'), a traditional affirmation of national renewal to Jews throughout the world but to Stalin a dangerous sign of "bourgeois Jewish nationalism" that subverted the authority of the Soviet state. In November 1948, Soviet authorities launched a campaign to liquidate what was left of Jewish culture. The leading members of the Jewish Anti-Fascist Committee were arrested. They were charged with treason, bourgeois nationalism and planning to set up a Jewish republic in Crimea to serve American interests. Jewish museums were closed one by one, and during the night of 12 to 13 August 1952, remembered as the Night of the Murdered Poets, thirteen of the most prominent Yiddish writers of the Soviet Union were executed on the orders of Stalin. But during the Second World War, the years the songs on this compilation where written, Russian Jews were still doing relatively well - even though after the Soviet invasion of Poland in 1939, Stalin began to deport massive numbers of Jews to the Jewish Autonomous Oblast (a Jewish autonomous area bordering China and apart from Israel the only area in the world with official Jewish status) and other parts of Siberia - allowing them to freely express themselves in their music and songs.

Some songs were written by Jewish soldiers who fought in the Red Army ('Yoshke Fun Odes/Yoshke From Odessa', the tale of a certain Yoshke, a brave and ruthless soldier in the Red Army, written to debunk the anti-Semitic myth that Jews did not fight in the war, 'Mayn Pulemyot/My Machine Gun', written from the point of view of a Polish-Jewish soldier in the Red Army who proudly boasts about the multitude of Germans he's killed with his machine gun), others by those left behind, anxiously waiting for news from the front ('Tabyls Briv/Tabyl's Letter To Her Husband At The Front', almost seventeen million workers, mostly women, worked long shifts in the industries that had to keep the Soviet war machine going, in this song one of these women encourages her husband at the front to kill as many Germans as possible, 'Fir Zin/Four Sons', a song in which a distraught father talks about his four sons who're all fighting against Hitler: One has already died, the other is still fighting at the front and the fate of the other two is uncertain). Touching is 'Mames Gruv/My Mother's Grave', about a little boy who loses his mother, lyrics that were symbolic for all who lost family members during the war, written at the time by Valya Roytiender, a ten-year-old boy from Bratslav in Ukraine and performed here by twelve-year-old Isaac Rosenberg. Also noteworthy is 'Kazakhstan', a tribute to Kazakhstan, a Soviet Republic that was prepared to take in war refugees regardless of their nationality or religious beliefs, and the only song that appears twice in the track list as it holds special significance for singer Sophie Milman, whose grandmother ended up in Kazakhstan as a Jewish war refugee, as well as for violinist/vocalist Sergei Erdenko, who dedicated the song to the Roma victims of the Holocaust. The compilation ends appropriately with songs like 'Nitsokhn Lid/Victory Song', a song that highlights the glorious victory of the Soviet army, but at the same time calls for celebration, dancing and a peaceful life, or 'Homens Mapole/Haman's Defeat', in which Stalin's victory over Hitler is compared to the execution of Haman, the villain from the Jewish Purim story, who during the Jewish exile in Persia forged a plot to kill all Jews but was eventually betrayed himself, celebrating the victory over the Germans and the end of the war.

In the 1990s a number of unlabeled boxes were found in the National Vernadsky Library in Ukraine and librarian Lyudmila Sholokova compiled an initial catalogue of the collected songs. At the beginning of the new millennium, Anna Shternshis, Associate Professor of Yiddish and Diaspora Studies at the University of Toronto learned of the existence of the songs, convinced of the historical importance of the collection and the insight that the lyrics could provide in the way the Jews dealt with the violence and destruction surrounding them during the Second World War, together with Russian singer-songwriter and Professor of Slavic Literature Dr. Pavel Lion aka Psoy Korolenko and violinist/composer Sergei Erdenko, she decided to put the lyrics to music again, bringing back to life this musical heritage that no one had heard since 1947. Producer Dan Rosenberg put together an all-star band consisting of five vocalists (including Sophie Milman), supported by five classically trained musicians.

Listen to this compilation with the extensive liner notes at hand and goosebumps are guaranteed. Fascinating piece of musical history!