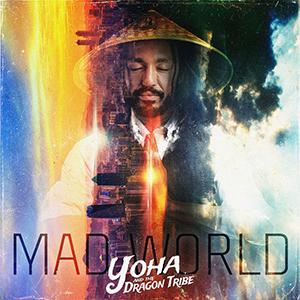 Yoha And The Dragon Tribe is a ten-piece formation from Macon and Dijon around brother and sister Sofiana 'Yoha' Bichet (vocals, guitar, flute and percussion) and Anissa Bichet (vocals, piano, melodica and flute) who, according to their own words, are just as much influenced by soul, blues, classical music and Indian influences as they are by reggae. In the four tracks on this 'Mad World' EP, they merge reggae with r&b and hip-hop ('I Don't Care What You Think', 'Mad World'). The concluding "special version" of title track 'Mad World' has nothing to do with reggae, but rather sounds like a pop ballad with leading roles for Anissa's piano and Laurent Kramer's cello. Unconventional French reggae with an eye to the world, but as the EP is downloadable free of charge on the band's website, doubting is not an option!