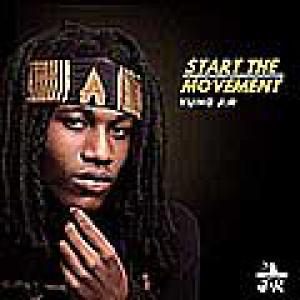 Ababa Jahnoi Reid aka Yung J.R. is Junior Reid's youngest son, presenting us his long player debut 'Start The Movement'. The album's title is inspired by a quote from Marcus Garvey: "... the Universal Negro Improvement Association is not a visionary one, but very practical and that is not so far-fetched...". Opener 'General' immediately hits the spot and is reminiscent of productions by contemporaries of Yung J.R. like Protoje or Chronixx. 'I Love King Selassie', of which there's also a dub version on 'Start The Movement', sounds like an update of the eponymous Black Uhuru classic and might be considered a nod to his father's past with that legendary band. The absolute party starter in the track list is without any doubt 'Want No War', a smashing duet with Cali P we simply couldn't get enough of. Another track you should definitely check out is 'Those Days', a song with a clear nineteen eighties vibe in which Yung together with Keida pays homage to artists like Tenor Saw, Sister Nancy and SuperCat. If you're not a fan of message music, Yung J.R. might not be your type of artist: "'Start The Movement' is a conscious movement which focuses on putting into practice what is being preached. So, if we as reggae artists and Rastafarians believe that there should be a more Afro-centric approach to learning in schools, then we should get actively involved in order to make the vision a reality. Music is not just about entertainment, it is also about the enlightenment and upliftment of the people. Musicians should seek to become revolutionary in their thoughts and actions and effect change in every aspect of society." Impressive debut effort by this youngest member from the Reid family!